In just a few short days, I’ll be on my way to San Diego for the 58th American Society of Hematology (ASH) annual meeting, an experience I’ve looked forward to for months! Among the thousands of attendees at ASH from around the world will be our group of 14 myeloma support group leaders, thanks to the forward-thinking insightfulness of the International Myeloma Foundation. We will be live on site, experiencing, absorbing, and sharing our perspectives via blogs, Facebook and Twitter, thereby expanding that to our local myeloma communities and support groups.

My involvement with myeloma began in 2006, when my husband Rob was diagnosed. What a huge change there has been in the treatment landscape since that time!  This year there are nearly 700 myeloma-related presentations at ASH, quite an increase from a decade ago. Having founded and led a myeloma support group since 2008, I know firsthand the anticipation patients and caregivers feel as they wait to hear about new research, learn outcomes of clinical trials, and find out what the myeloma experts are excited about, what’s working well and – a vastly important facet of ‘living well’ with myeloma –  how new treatments affect quality of life.

Something I’ve found to be invaluable over the years as a myeloma caregiver is not only staying informed of what’s approved for treatment of myeloma today, but also to keep track of what’s on the horizon.  Research in the field of myeloma has exploded in recent years, and with the IMF’s International Myeloma Working Group paving the way, there has never before been more reason to be so full of HOPE for a CURE – two 4-letter words that we all want in our vocabulary!

This year, Dr. Brian Durie gave us an early preview of ASH highlights in his November 17 ‘Pre-ASH” teleconference. One thing he mentioned that caused my ears to perk up is a new therapy using an AIDS/HIV drug in combination with Velcade to overcome Velcade resistance – that certainly sounds interesting! Other things I’ll be following are advances in MRD (Minimal Residual Disease) monitoring, Next Generation Flow (NGF) testing, and monoclonal antibodies (mAbs). My husband Rob participated in a Phase 2 clinical trial using daratumumab (now called Darzalex) as a single agent in 2013 so I’m following that research closely. Of course anything related to the Black Swan Research Initiative® (BSRI)—the IMF’s groundbreaking project aimed at developing the cure for myeloma—will definitely be on my radar! I’ll also be zoning in on follow-up research we learned about at last year’s ASH, such as Keytruda (pembrolizumab), Selinexor, and CAR-T Cell therapy, among others.  To be honest, I’m excited for ALL of it, because each new potential therapy opens up another possibility to CURE this disease!

I’m very excited to attend ASH for the first time!  With six classes of drugs and over 30 combinations currently available to treat myeloma patients, it seems there is definitely a bright future ahead as we get closer to the cure. I may need to bring sunglasses! The days ahead may be long, but the promise of new and updated information is energizing. I’m eager to share more as the week unfolds. Stay tuned!

When her husband Rob was diagnosed with myeloma, Sue became involved with the myeloma community. In 2008, Sue and Rob founded a local myeloma support group--the West Bend Multiple Myeloma Support Group, and Sue became involved with the IMF Advocacy team. She is also a longstanding member of the Wisconsin Multiple Myeloma Conference. In 2012, she joined the IMF as Midwest Regional Director of Support Groups. 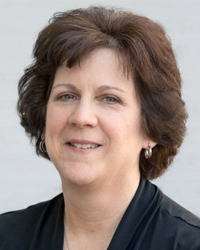