I remember the day that President Kennedy was shot: 12:30 p.m., November 22, 1963. I was in middle school . . . in the cafeteria with many confused adolescents when I learned the news. Just as clearly, I remember staying with my aunt while interviewing for medical school in San Francisco. Sitting across from me on the sofa she told me she had multiple myeloma and was being treated with melphalan. I did not realize the gravity of the diagnosis.

I remember the plenary session at the American Gastroenterology Association where Dr. Barry Marshall from Australia presented his findings on the cause of gastritis and ulcer disease. He identified Helicobacter pylori, a bacterium, that caused an infection of the stomach lining that lead to the etiology of gastritis and ulcer disease. In identifying this infection, Dr. Marshall changed how we understand and treat the disease. For his findings, Dr. Marshall was awarded the Nobel Prize in physiology. Surgeries for ulcers were greatly diminished, and patients were put on a simple antibiotic therapy. I still remember the satisfaction of treating my first patient for recurrent ulcer disease with antibiotics. It was an enormous relief to know he would be cured of the disease for life.

With the same excitement and anticipation, I will be attending the American Society of Hematology 2016 and hope that a breakthrough treatment or cure for multiple myeloma can come from the 697 abstracts being presented at this year’s meeting. I am excited to see the results of the studies supported by the IMF’s Black Swan Research Initiative®. These include the MRD that tracts early disease with the Next Generation Flow method. The new therapies with the available agents would benefit from these results. I am hopeful that we learn of a successful early diagnosis and treatment for MM so that all MM patients can benefit from more standard therapies.

I was diagnosed in 2010 and underwent a ASCT in 2011 and have been on maintenance therapy since transplant. Today, I attend the Land of Enchantment Support in Santa Fe, New Mexico.

Diagnosed with multiple myeloma in 2010, John DeFelice and his wife shortly thereafter attended several Los Angeles Patient & Family seminars. Today, he is co-leader of the Land of Enchantment Multiple Myeloma Support Group. Excited to attend ASH 2016, John hopes to learn about new therapies for relapse and about data in regards to maintenance therapy. 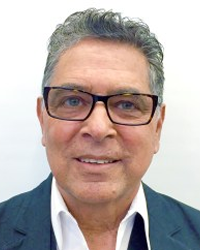