Growing up in Western Pennsylvania, Sunday afternoons in the fall usually meant watching a football doubleheader on TV. Often, the late game featured the Chargers, at home in San Diego. It never failed to strike me that the grass looked greener, the sky looked bluer, and even that the announcers sounded clearer. I moved to southern California in 1980, and settled in San Clemente, just 60 miles up the freeway.

San Diego is often called “America’s Finest City”, and most visitors to the 58th American Society of Hematology (ASH) Annual Meeting and Exposition will not be disappointed with the climate, even in December. I’m just happy to be in the same time zone. The International Myeloma Foundation (IMF) holds us to a grueling schedule, and last year in Orlando, my body felt like it was 2:30 a.m. at one of our morning events.

Coast of San Diego–location of #ASH2016

The big news at last year’s meeting was the approval of three new drugs: Darzalex® (daratumumab), Empliciti®(elotuzumab), and Ninlaro® (ixazomib). What wasn’t so clear is how the medical community would prescribe these drugs in the clinical setting. Following a nine-year remission on a single treatment, Revlimid® (lenalidomide), I found myself in relapse this year. Therefore, I’ve decided that the focus of my blog will be two-fold: application of combinations featuring the new drugs, and treatment of relapsed myeloma. In addition to my blog, I will be posting to my Twitter feed #IMFtomMyeloma.

Coincidentally, the Chargers are playing at home during ASH, Sunday, December 4th. Be sure to tune in and see what I mean! After you’ve read all the blogs and news from ASH, of course. 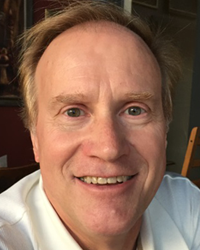